Instead of waking up early to study for the exam I slept in to get a couple more hours of sleep instead. I couldn’t do it this time anymore. No more laptops or notes were allowed.

Not to mention I’ve never been particularly strong in physics.

It’s Wednesday, I started studying in the morning with a strong cup of coffee. There’s enough for 4 more cups in the pot.

I studied in 25 minute intervals.

It’s around 2 pm, I haven’t done any grocery shopping for days the only food I have are 3 eggs, a packet of ramen, some roma tomatoes, and a small bag of frozen deer meat given to me by a friend at Thanksgiving.

Besides those my fridge is void of any edibles. Either they are just condiments or frozen vegetables I have no idea how to prepare.

I decided to cook the ramen with all the eggs and a tomato.

The entire coffee pot was finished now. I looked at the clock it was about 6 pm, too late to drink any more caffeine I thought. Then I realized I pretty much had to stay up all night to review all the materials for the exam that was taking place at 8 AM that morning. Much earlier than usual class time.

I boiled water on the water heater, reached into the cupboard to unveil a yellow rectangular box full of jasmine tea. Filled up a teapot and let it steep using the boiled water. 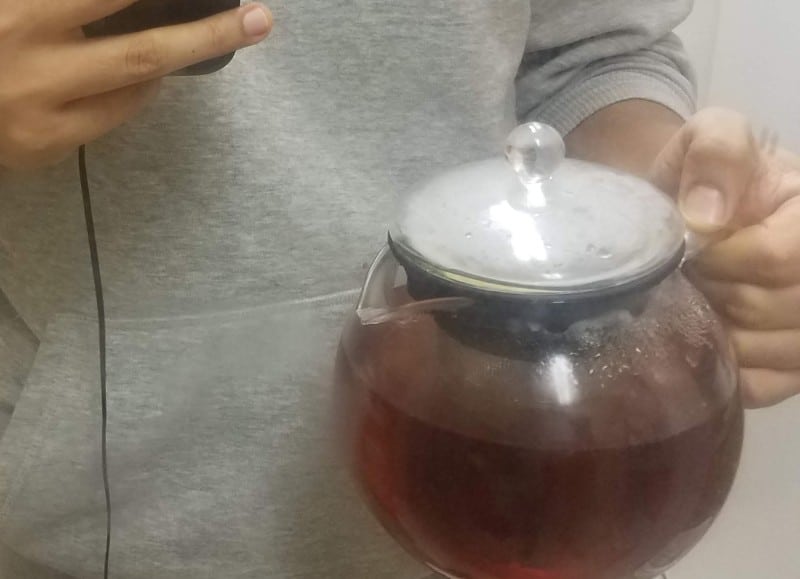 It was hard to focus on studies. Every 25 minutes I got up and did something. I went for a walk in the dark at 8 pm in the cold outside. I came back and did push ups.

Someone in the class’ physics group chat noted there would only be multiple choice questions. Nice. At least there was a slight chance of being correct even if you’re clueless.

It was past 12 AM, I had drank all of my tea so I went to brew another jarful. Classmates were still actively asking and sharing comments on the group chat.

I had so much caffeine in me by this point I was wide awake at 3 Am. I still got up every break and stretched out. I also had to take a bathroom break each time. By this point the group chat has died out.

On one such break as I went to the bathroom I studied my face in the mirror. It feels like acne was about to form. I also noticed I had some blood in my nose. It had dried up.

I started to become sleepy around 5 AM. I thought I would have enough time take a nap at 6:30 AM but I was wrong because by that time I still had so much notes to read.

7 AM hit. I still had to take the train, and I don’t want to be late for the exam so I got up to take a shower. I started hot and turned the water cold halfway. It was extremely cold.

I got out, checked the weather, it was 29 F (~1.7 C). No wonder that shower was so extreme, I thought. Got to the train station, the train was running late. There was a small crowd, they all looked cold.

The train arrived, it was packed. I still haven’t finished reviewing notes so I started reading them while standing. Focusing on the scribbles with the moving train was making me nauseous. I looked at my notes all the way to class.

I was fairly confident before the exam. There’s no way the instructor made the exams difficult when most of the class have been struggling on grades.  I thought.

I said good luck to the guy sitting next to me, turned my phone to silent and started the exam. 3 minutes into the exam a phone alarm went off in the class. It sounded vaguely familiar, and fairly close to me. It was coming from my bag…People were staring at me.

It was an alarm from 2 days ago I had forgotten to turn off. I thought of saying some smart-ass remarks to the class but decided against it.

The test questions were really hard. I skimmed the questions, and kept moving on the next question.

It didn’t help that my body wanted to sleep right now.

About an hour into the exam, somebody finished (allegedly). The teacher couldn’t believe it either. She smiled and said something to him. No idea what was being said, but the dude still had bed hair and looked like a nerd. He’s probably really smart or didn’t know anything. Beats me.

I asked the teacher what time exam ends. There was an hour and a half. Plenty of time.

I dozed off to sleep. Not once but 3 times.

I am a very lucky man.

For I could have easily accidentally slept all the way thru. I didn’t finish the entire questions but I am quite glad I woke up on time to do most of the problems. There was no way I could set an alarm to wake me up during the exam.

There were about 5 people left when the exam time ended at 10:30 AM.

“Who else failed” said someone on the group chat. It received a bunch of likes. Good to know.

I posted a gif on the group chat to sum up how I felt when I saw the first page questions.

It got even more likes.

A guy who is somewhat active on the group chat posts a sensitive comment saying he thought the exam started at 10:30 AM.

He posted a picture of himself sitting in the empty classroom.